Cage Dive On The North Shore

Did you know that Hawaii is home to approximately 40 different species of sharks? That’s right, 40. But before the ‘Jaws’ theme song takes up permanent residence in your head every time you try to snorkel, there are a few things you should know about sharks in Hawaii.

For starters, you’re more likely to be killed by a coconut than a shark. Falling coconuts kill about 150 people each year, compared to an average of 10 annual deaths attributed to sharks. So whatever you do, don’t let your fear of sharks keep you on the beach, especially if you’re sitting underneath a bountiful coconut tree. 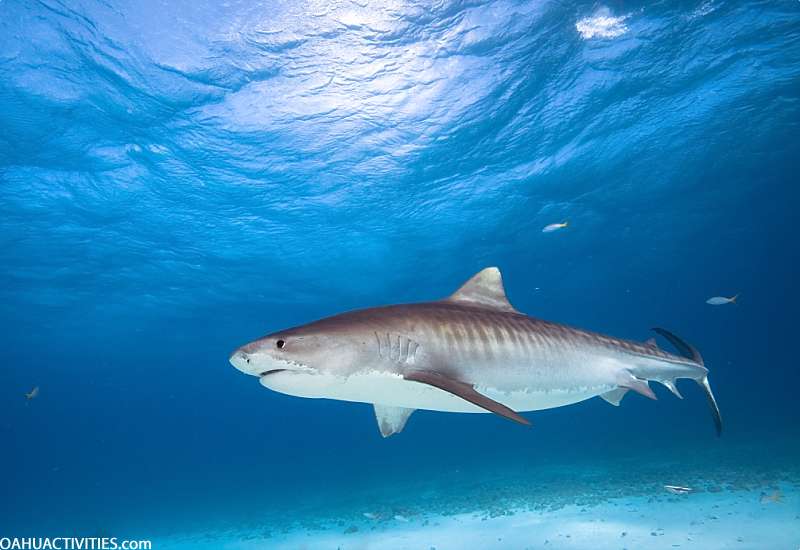 Secondly, sharks get a bad rep. They’re not the bloodthirsty man-eaters like movies and media outlets make them out to be. On the contrary, they are actually incredibly essential to the health of the ocean. And despite the aura of fear that surrounds them, there are plenty of visitors to Hawaii willing to pay for the pleasure of swimming with sharks. That’s where Haleiwa Shark Tours comes in. Locally owned and operated, this pelagic shark diving tour safely brings visitors face to face with the ocean’s apex predator.

This tour departs Haleiwa Harbor and heads three miles offshore, well into the deep blue depths. The coasts off the North Shore lead directly into the expanses of the Pacific Ocean, and the nearshore waters are a favorite habitat for a profusion of sea life.

Once stationed at the dive site, the process of attracting the sharks begins! Sharks can pick up on even the slightest electrical signal given off by other animals’ muscle contractions. Revving the boat’s engine in neutral attracts sharks by sending out electrical pulses similar to those found in potential prey. As the engine revs, the eerie outlines of sharks begin to rise up from the deep ocean darkness. 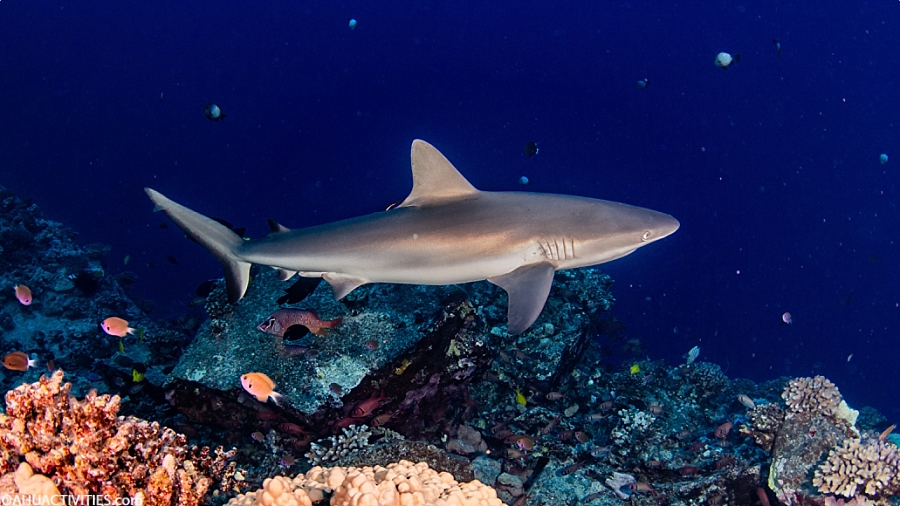 While the engine’s electrical signal might mimic an animal in distress, there is slim to no chance of you becoming prey for a hungry shark aboard a shark tour. Unlike other open ocean shark dives, this tour safely keeps the sharks and guests separated by a cage. This is probably the only time you will be grateful to be behind bars! On top of that, most of the sharks you will encounter on this shark tour, while hefty in size, are not usually aggressive towards humans.

Once in the cage, you’ll get plenty of time to marvel at the most feared and mischaracterized creatures in the ocean. Snorkel gear is provided, and photography gear can be booked ahead.

Out of the 40 shark species that patrol Hawaii’s waters, only a handful are seen often. Galapagos and sandbar sharks are most commonly spotted on dives, and the occasional tiger shark has been known to cruise through as well.

Galapagos sharks can grow up to 12 feet, but the biggest ever recorded in Hawaii was 9.8 feet. Sandbar sharks are generally under 6 feet. Both of these species are not typically aggressive towards humans and feed on smaller fish and cephalopods. 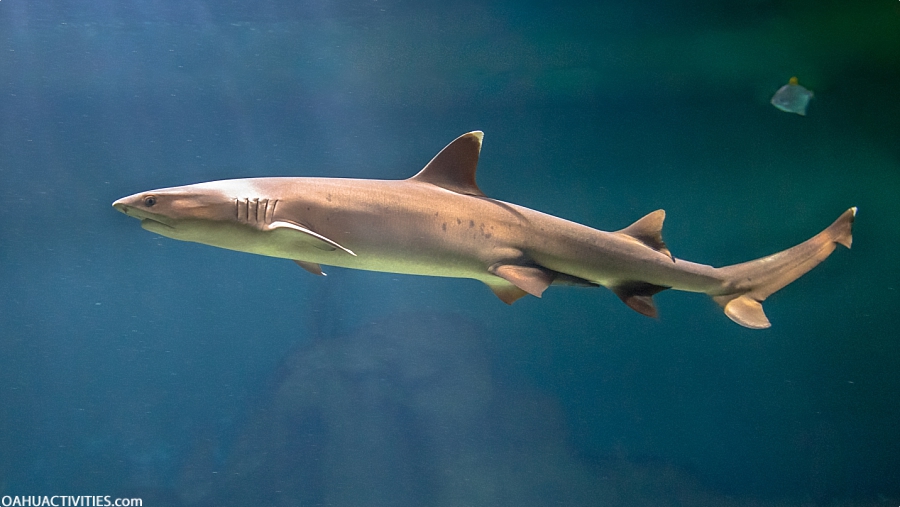 On the other hand, tiger sharks are the king of the seas in Hawaii, growing up to 16 feet. While tiger sharks are the culprit for many of the major attacks in Hawaii, they don’t intentionally target humans. Rather, it is believed that most tiger shark attacks on humans are the result of mistaken identity. Many attacks happen in murky water or in low light when a shark can easily confuse a human for a turtle or seal. Tiger sharks are essentially the “trash can of the sea.” They feed on dead animals and serve as an ocean clean-up crew. 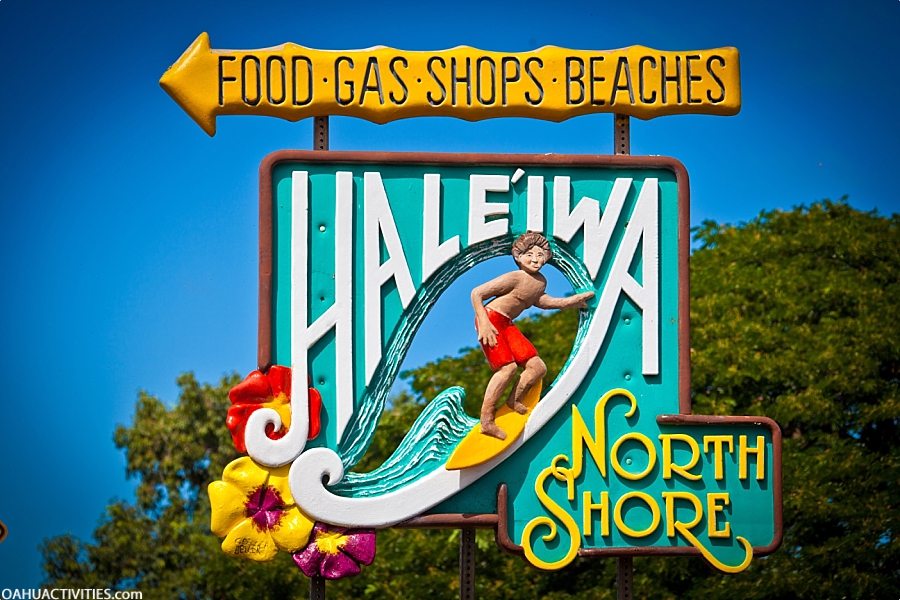 Haleiwa Shark Tours is the only shark tour that is owned and operated by Native Hawaiians. You just might recognize the owners, Kala Alexander, and Makua Rothman. The two are both professional surfers, and Kala has appeared in a handful of movies and TV shows like Blue Crush and Hawaii 5-0. Makua is the 2015 WSL Big Wave World Champion and an acclaimed musician. You’ll often find their boats, the Kama Hele Kai and the Mano Kalani Po flying the Hawaii state flag and the Kanaka Maoli flag.

Owned and operated by Native Hawaiians, you can trust that you are getting a genuine Hawaiian experience. This pelagic shark tour proudly shares the significance of sharks in Hawaiian culture, history, and mythology.

Sharks were often killed in ancient times, and every part of the animal was put to use. The skins were used to make drums, and the teeth were used to make weapons like clubs. In Hawaiian mythology, sharks are an amakua. An amakua is a family god or guardian spirit that acts as a healer or advisor. It was often believed that a departed ancestor took the form of their family’s amakua. 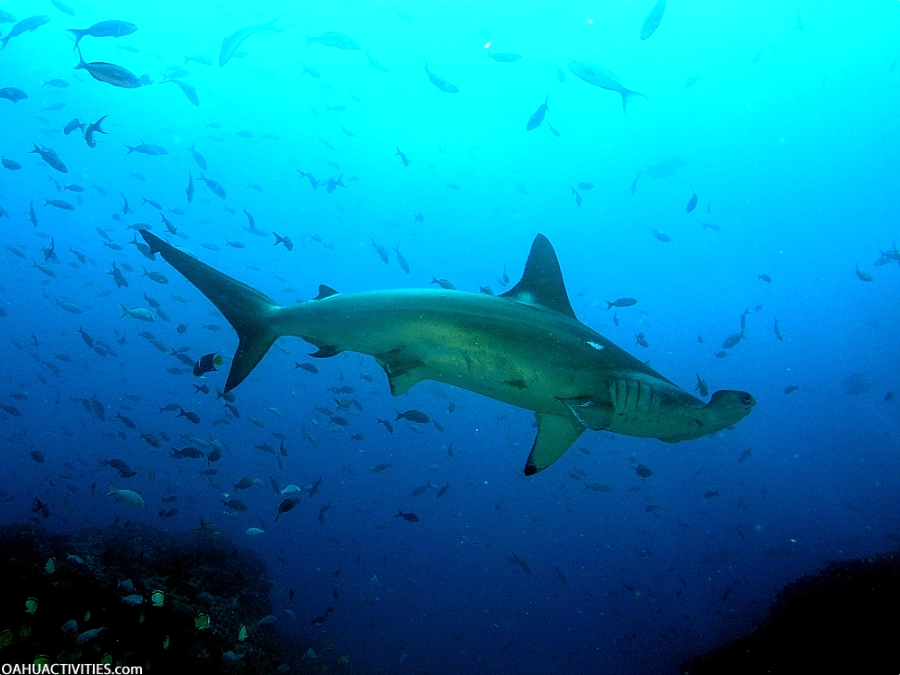 There are many shark gods in Hawaiian mythology, but the most notable by far is Kamohoali’i. Kamohoali’i is said to be a mighty god with great navigational powers. He is credited with leading the Polynesian voyagers to Hawaii, and it is said that he helps lost ships return home. Devout followers of Kamahoali’i honored him by never killing or harming any sharks. You’ll learn more about the mighty Kamahoali’i and his incredible powers before you slip into the water for your dive.

The Importance of Sharks

In addition to learning about the Hawaiian significance of sharks, this tour aims to educate visitors on the importance of sharks in a healthy ocean ecosystem and change their fearsome stigma. For years, sharks have been made out to be menacing, bloodthirsty creatures, when in fact, much like other animals, they are quite individualistic and have different personalities. On top of this, they are crucial to the health of the ocean. If sharks disappeared from the sea, the effect of their absence would trickle down through the food chain, and the results would be disastrous. If there were no more sharks, larger fish would dominate, feeding on smaller herbivores. With fewer herbivores to munch away at macroalgae, the algae would start to reign supreme, smothering the coral reefs and affecting their survival. One missing link in the food chain has the potential to topple an entire ecosystem. 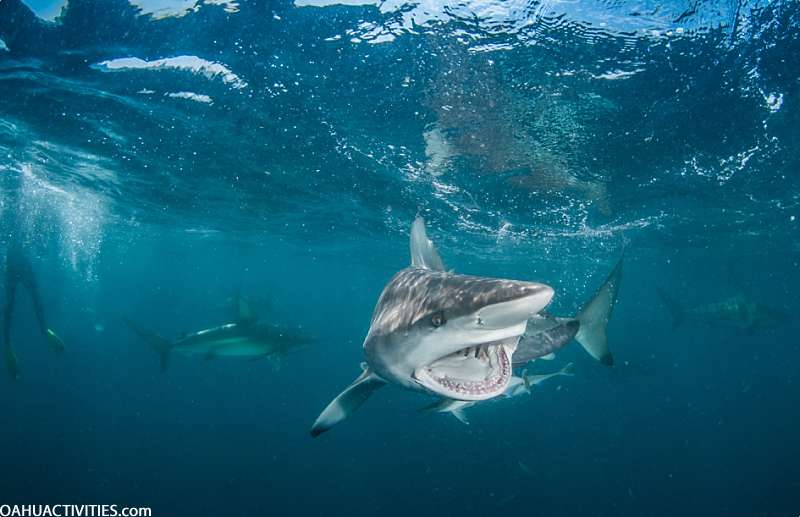 Once you’re safely back on land, you’ll find yourself with both a renewed respect for the ocean’s apex predators and memories to last a lifetime. In the eyes of Haleiwa Shark Tours, that is mission complete.