Striking Beauty From Above

Swaying palms, colorful hibiscus, and white sand beaches- it’s easy to find yourself enthralled and perfectly content with exploring Oahu on the ground level. Although, perspective is everything when it comes to the island’s luminous natural beauty. And while Oahu’s bustling city, tantalizing coves, and imposing pali cliffs are breathtaking, to begin with, exploring the isle from the seat of a buzzing helicopter only serves to upgrade Oahu’s stunning scenery.

Enter The Oahu Experience, a 60-minute luxury air tour that leaves no stone unturned. As the classic John Cruz song goes, you’ll explore The Gathering Isle “from the mountains to the ocean, from the windward to the leeward side…” albeit in reverse. The tour departs from Honolulu Airport, on Oahu’s coastal leeward side. 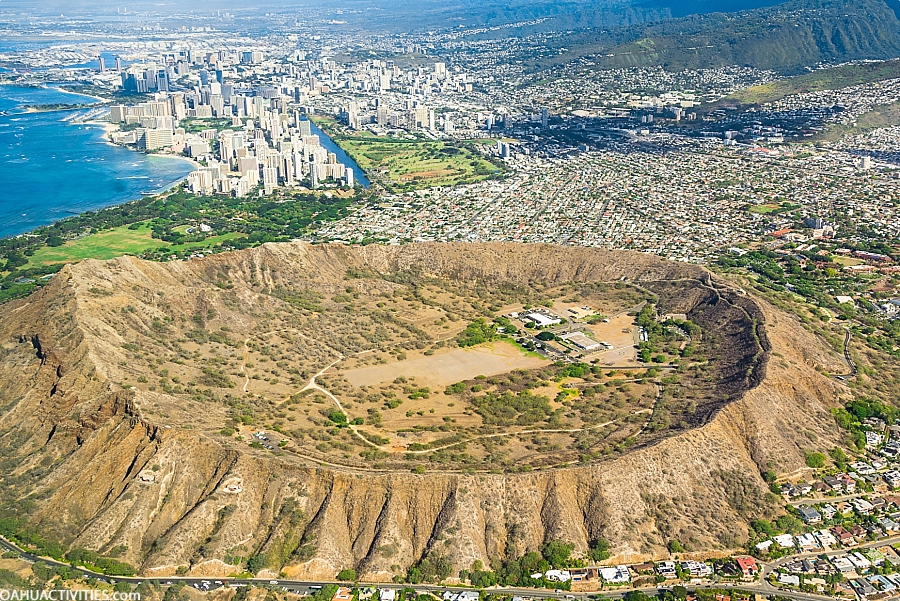 If touring the island with your own personal pilot/tour guide isn’t sweet enough, this tour takes luxury to the next level. Every guest may as well be Queen Elizabeth. For starters, shuttle service to and from the airport is complimentary for all guests. In addition to these tours being completely private, the real kicker is that every seat aboard this chopper is a window seat. That means there’s no competing with strangers for views. That also means that this tour can accommodate a maximum of only three passengers. However, don’t sweat if you’re a group of five or six. Larger groups will be accommodated by two choppers flying side by side- talk about VIP service. 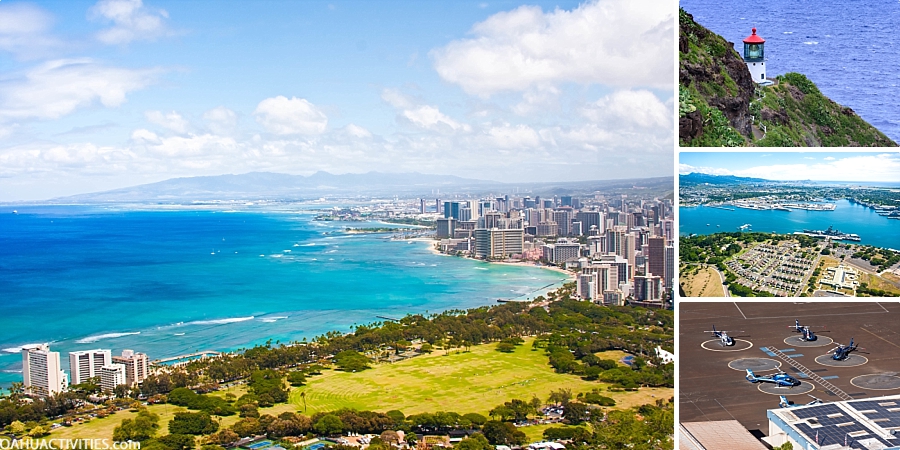 Oh, and there’s more. Guests can book their tour doors OFF or doors ON. Doors OFF will give you unobstructed views and the ethereal experience of soaring over Hawaii with the wind in your hair.

This tour circumnavigates almost the entire island in the span of an hour. Departing from Honolulu Airport, you’ll begin with a fly over the heartbeat of the Pacific- Waikiki. You’ll be treated to expansive cityscapes and Waikiki Beach’s blue ocean hues dotted with dozens of surfers. Before long, you’ll find yourself rounding the corner of Diamond Head. 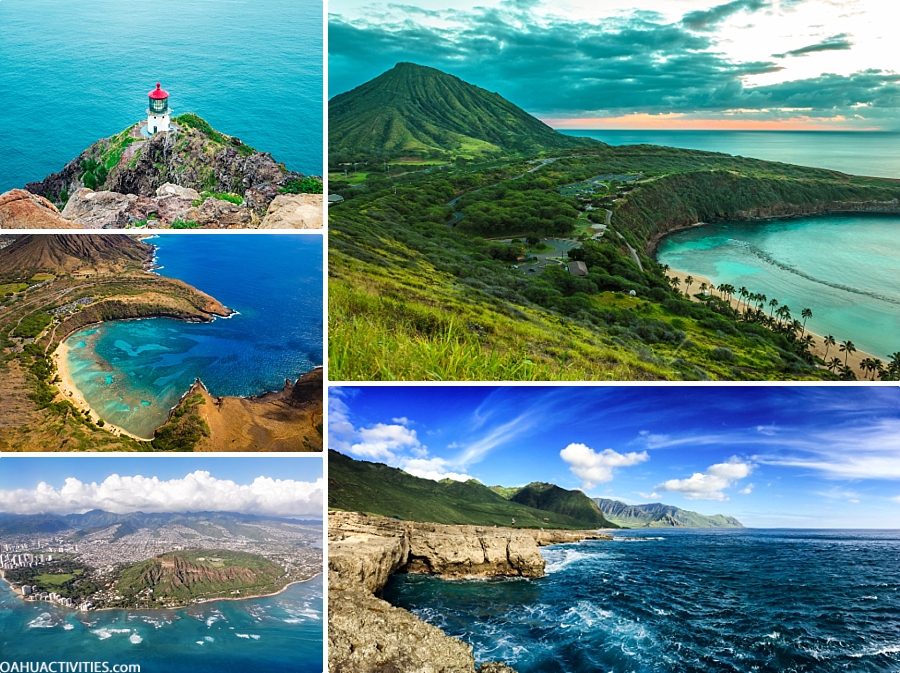 The flight continues along the southern coast, skirting above colorful outer reefs before eventually reaching the gaping entrance to world-famous Hanauma Bay. Looming above the bay’s silky half-moon of sand is the towering Koko Head Crater, formed by volcanic eruptions thousands of years ago. After a quick buzz past Hanauma Bay, you’ll soon find yourself looking down on the rugged sea cliffs at Makapuʻu Point and Makapuʻu Lighthouse. Here, the coastline curves north, signaling your arrival on the windward side.

For those unfamiliar with the term, windward essentially means the side of the island that faces the wind. While it’s debated, most agree that Oahu’s windward side stretches from Makapu’u to the small town of Hauula further north. The windward side sits in stark contrast to the bustling city of Waikiki and the crowded neighbors of the leeward side. 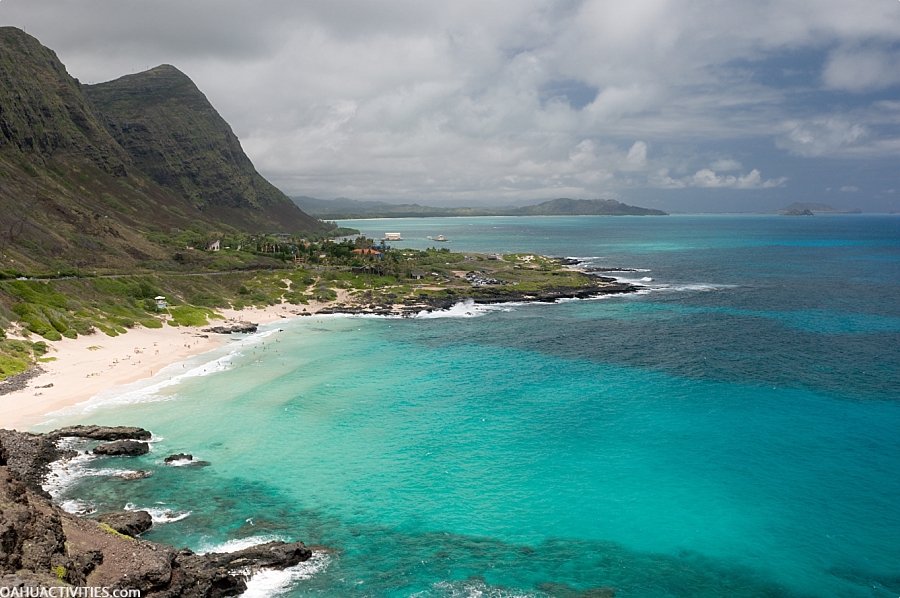 Oahu’s windward side is characterized by the sheer verdant cliffs that border the area, small towns, and velvety strips of white sand. Along this coast, the sea is a swirl of blue, ranging from turquoise to cyan to navy. A flyover Kaneohe Bay underscores this fact. The bay’s sandbar, steep drop-offs, and flecks of the shallow reef are a veritable kaleidoscope of colors.

Oahu isn’t typically known for its mountains- Waikiki and the miles of beaches usually steal the show. However, despite being the most populous Hawaiian island, vast swathes of Oahu are inaccessible due to rugged mountain ranges. In fact, one of the most spectacular sights on the island is only accessible by helicopter. This is Sacred Falls, a 1,100-foot waterfall located deep within a narrow river valley. Sacred Falls was once a state park, but a landslide took the lives of eight people in 1999, and now the area is closed to foot traffic.

You’ll visit this breathtaking waterfall, as well as the stunning Kaʻaʻawa Valley- also called Jurassic Valley. Can you guess why? Several Jurassic Park scenes were filmed here as well as countless other movies and TV shows. Kaʻaʻawa Valley is also one of the most sacred places on Oahu and was once a residence for Hawaiian aliʻi, or royalty. Once you witness the sweeping majesty of this valley, it’s easy to see why. Your pilot will fill you in on the history of this valley and its cultural significance.

After an in-depth exploration of the windward side, it’s off to the north shore, or as surfers call it, the Seven Mile Miracle. Here, you’ll glimpse some of the world’s most famous surf breaks, from Pipeline to Waimea Bay. In the winter, these breaks come alive, and some of the planet’s most daring surfers flock to this coast. In the summertime, you’ll be able to see the fingers of the reef that make Pipeline so dangerous. Once you conclude your north shore exploration, you’ll head back to the island’s leeward side. The day concludes with a slow flyover of Pearl Harbor, where you’ll be able to see the USS Arizona Memorial and the sunken battleship that still sits at the bottom of the harbor. 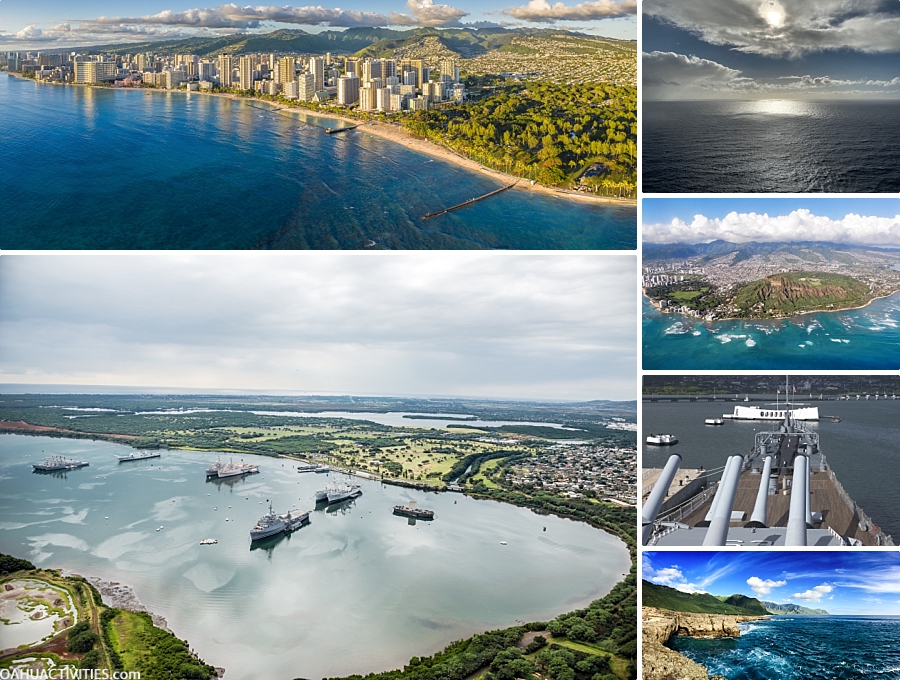 Once you’re back on the ground, you’ll be left with an entirely different perspective of the island of Oahu. The Gathering Isle is much more than city streets and bustling beaches. This tour’s bird’s eye visuals, coupled with the pilot’s in-depth narration, will forever change your view of Oahu and create memories to last a lifetime.