Diamond Head has long served as one of Hawaii’s most iconic images. Traditionally known as Le’ahi—or “Tuna’s Brow” in Hawaiian—the dramatic backdrop to Oahu’s Waikiki Beach was given its contemporary name when a group of British sailors mistook its calcite crystals for diamonds. No matter if it was a mistake: The name stuck, and the progeny of Ko’olau Volcano continues to sparkle today—and brightly at that.

***Beginning May 12, 2022, reservations will be required for all out-of-state visitors of Diamond Head State Monument. However, visiting with a guided tour will allow you to bypass reservations.***

Admiring its shape from the shore isn’t the only way to enjoy it, either: Diamond Head Summit Trail, which leads to the crater’s peak, offers an inside look at the famed landmark and an outward glance at some of Oahu’s most spectacular vistas. Here’s all you need to know about the epic trail: 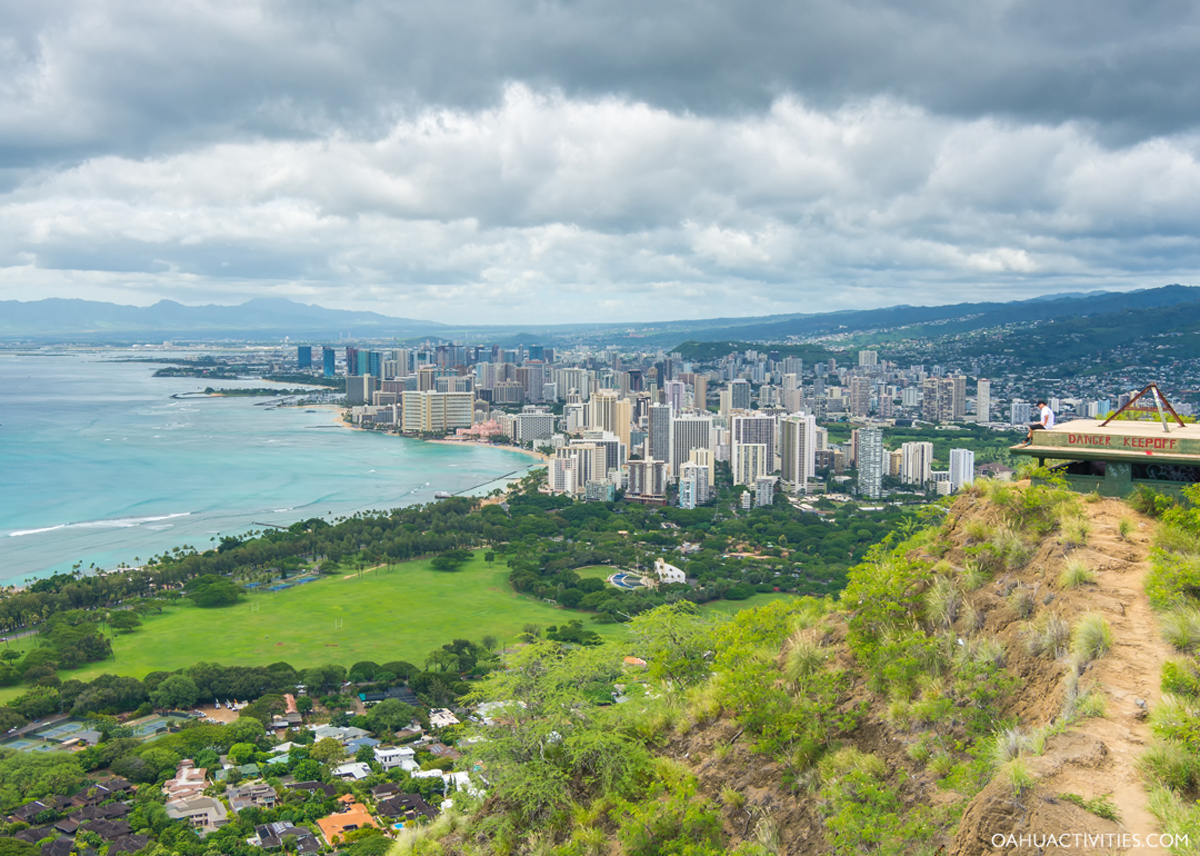 …is the trail’s length roundtrip. A paved concrete walkway is provided for the first 0.2 miles of the trek, which begins at the parking lot on the crater floor; after this, the trail becomes steep, relatively strenuous, and rutted. It’s also filled with switchbacks that were once used for foot traffic and mules, who brought materials to the summit for the construction of its Fire Control Station—a structure that continues to stand today. At the top of the switchbacks, you’ll find the best views thus far on the route, as well as the remains of a winch and cable—items that were once employed to lift building supplies from the crater floor.

…is roughly how many hours the hike will take you. Appropriate footwear (no slippers!), a moderate level of fitness, and caution is required. In other words, take your time and go slowly (and savor everything around you).

…is the elevation you’ll gain along the trail (the summit stands at 761 feet) but the calf-burning effort is well worth-it: The panoramic views at the top offer sweeping vistas of the shoreline from Koko Head to Hawaii Kai—and glimpses of the Waianae Mountains on the island’s leeward side. (Indeed, Diamond Head Crater is reputed to hold the title of the longest recorded land views on record.)

…years ago, the saucer-shaped crater was formed during a single, brief eruption that sent ash, cinder, and chunks of limestone into the air. This magmatic debris settled and solidified into a rock—called a tuff—that ultimately created the crater.

…was the year Diamond Head Summit Trail was started as part of the U.S. Army Coastal Artillery defense system. Artillery cannons, an observation deck, and cement bunkers were erected. It’s no wonder: the crater’s strategic location and height rendered it an excellent lookout, offering seaward viewing for potential sea and air attacks. Ancient Hawaiians knew this as well, and once lit bonfires at the summit to guide voyaging canoers—and to keep an eye on warships.

…speaks to the number of feet in the lighted tunnel on the trail. From there—and at the peak—you’ll find some of those World War II bunkers.

…is when the abovementioned Fire Control Station was completed. Formed as a command and observation center, it once housed instruments and plotting rooms to direct artillery fire. As the Hawaii Emergency Management Agency reports, “Diamond Head was prepared to defend Oahu from attack but no artillery was ever fired during the war.” All weaponry was removed in 1950.

…goes down as the year in which the lighthouse at Diamond Head was constructed. It was listed on the National Register of Historic Places in 1980 and first featured on a U.S. postage stamp in 2007.

…marks the year of inception of what became known as “Hawaii’s Woodstock.” On New Year’s Day of that year, Diamond Head Crater Festivals—also called “Sunshine Festivals”—began lighting up Waikiki’s skies. These all-day music festivals drew over 75,000 guests and featured luminaries ranging from The Rolling Stones to the Grateful Dead. In 1976 and 1977, the beloved concerts grew into two-day events—the popularity of which eventually led to the festival’s “cancellation by the State Department of Land and Natural Resources over community noise and environmental impact,” Hawaii Magazine states.

…dollars were paid by the feds in 1904 to transform the crater into a military reservation.

…is the number of bucks you’ll need to pay per vehicle. (Walk-in visitors pay $1.) Interested in receiving a Certificate of Achievement for completing the hike? You can score one for an additional $2 donation—and, of course, for doing the trek.

…stands for the (rough) number of hidden tunnels, which were excavated into the crater’s lava and ash. 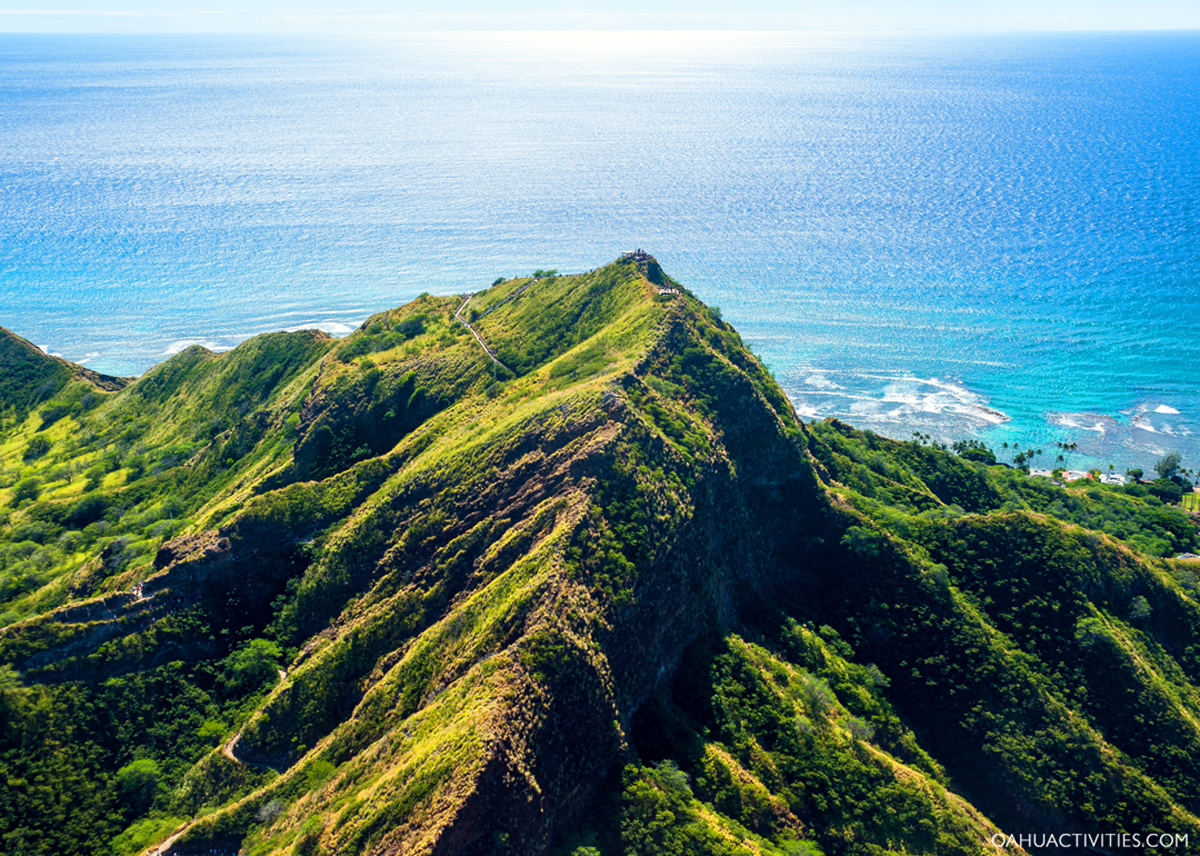 …equals the number of acres that encompass Diamond Head State Monument, to which the summit trail is adjacent.

…pm is the cut-off time for visitors getting on the trail.

…is when the gates are locked; all visitors must be out of the park by this time. The trail is opened again at 6am—just in time for sunrise.

…feet is the width of the crater’s diameter.

…stands for the number of people who visit Diamond Head Summit Trail annually, which comes down to approximately 2,500 visitors daily (and makes it one of the most heavily-trafficked hikes in Hawaii). To phrase it differently, be prepared for crowds, but do note that it adds to the camaraderie—and doesn’t take away from the trail’s beauty. 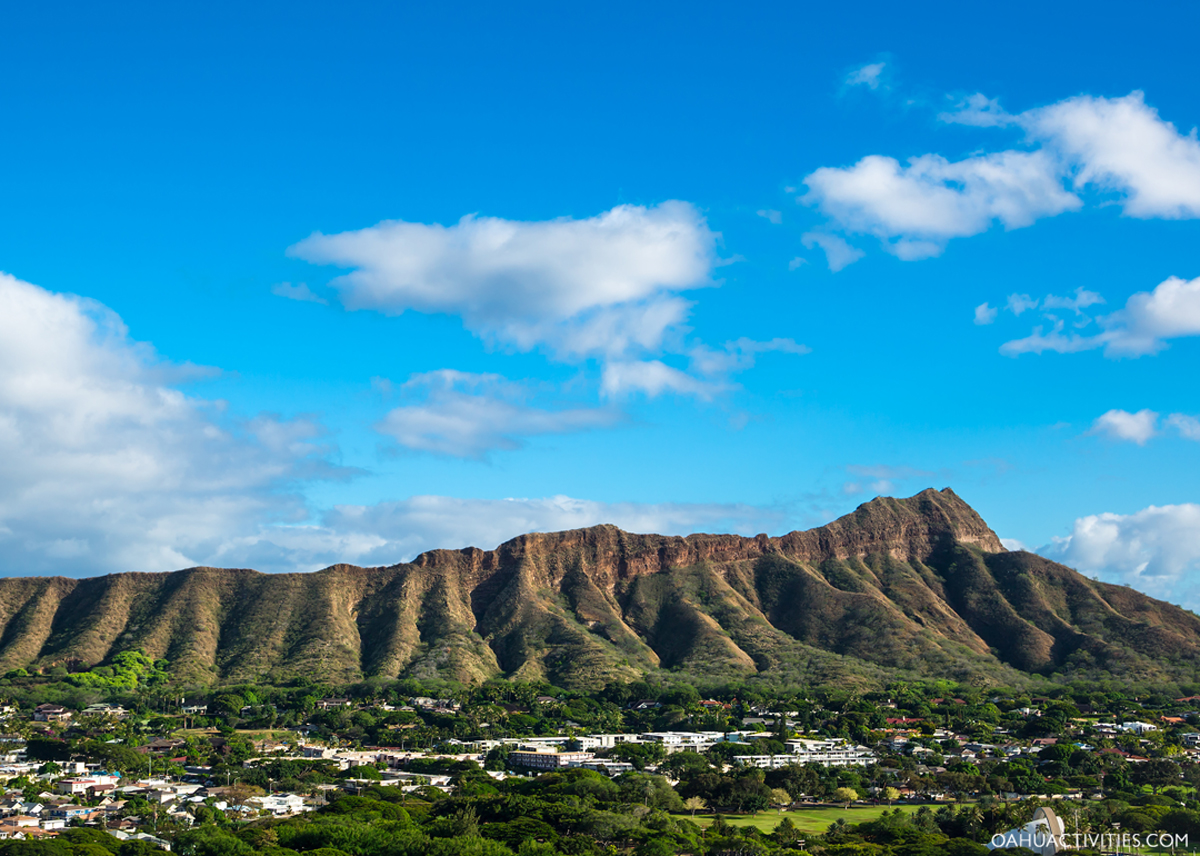 …(thereabout) equals the minimum number of steps you’ll have to ascend before reaching the summit. After the lighted tunnel, you’ll have a choice on the path—turn right and you’ll need to go up 99 steep steps, then climb two stories on a spiral staircase until you reach the observation deck; it’s another few steps from there to the summit. Turn left and you’ll be able to use a combination of paths and outdoor staircases to reach the acme.

…represents the number of modern amenities the park offers. These include ADA accessible, a concession stand, a picnic pavilion, picnic tables, a gift shop, restrooms, water fountains, and the best of all: a viewpoint.

…is the average temperature at Diamond Head, making ample water—and lots of sunscreen—a must. For the coolest hike, aim for sunrise—but keep in mind that this is also when the trail is at its busiest.

…is the year Diamond Head was named a National Natural Landmark (the place was named a State Monument in 1962). The site was opened to the public again in 1976.

…is the number of days it’s open annually. Translation? No matter what time of year you’ll be visiting Oahu, you’ll have the chance to relish this remarkable trail.~ 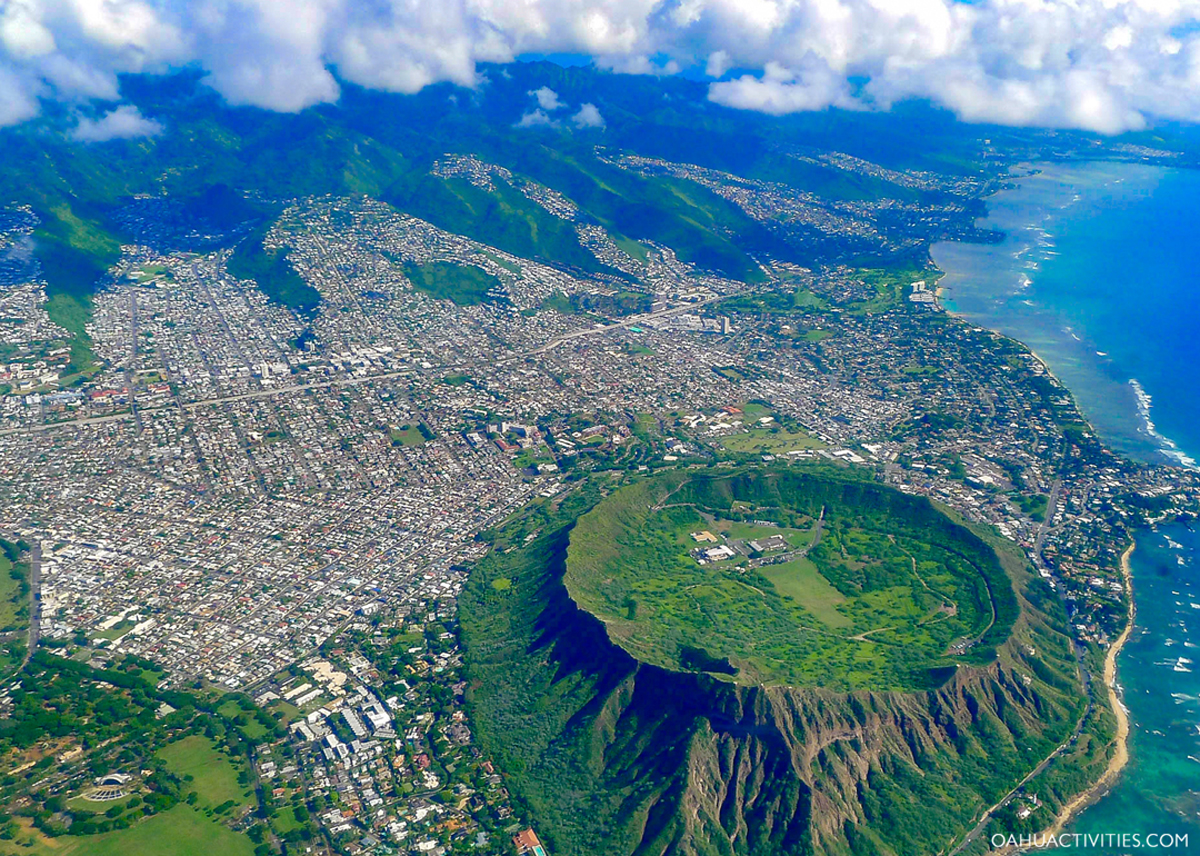